Student activism has been pivotal in Ghana’s political and democratic history. Prior to Ghana’s Fourth Republic, student activism was highly confrontational and entailed student support or opposition to the various regimes depending on the extent to which the regimes were accepted by all as being rightful or legitimate. After 23 years of uninterrupted constitutional democracy, Ghana has earned the accolade of being a successful electoral democracy. However, in terms of democratic progression, the mere conduct of periodic elections that sometimes lead to alternation of power is described as elementary and a low quality democracy. Given that Ghana’s democratisation process since 1992 has not been static, some remarkable strides have been made in improving the nation’s democratic quality. Using a purely qualitative research design and interviews with some former student activists, this study argues that the modest strides made in the quest for high quality liberal democracy in Ghana cannot be meaningfully discussed without acknowledging the invaluable contributions of student activism. The study further suggests a relationship between democratic quality and student activism. It postulates that the shift from the usually oppositional and sometimes violent student activism in Ghana’s Fourth Republic could partially be attributed to the country’s strides made in the drive towards democratic maturity. For students to continue their role as vanguards of democracy in Ghana, the study recommends an amalgamation of all tertiary networks and other student splinter groups under the National Union of Ghana Students; and a shift in the modus operandi of the Union from confrontation to the use of dialogue and other peaceful democratic means to achieve its objectives. This could contribute to the restoration of the Union’s former glory as a united, national and independent mouth-piece of students in all national issues. 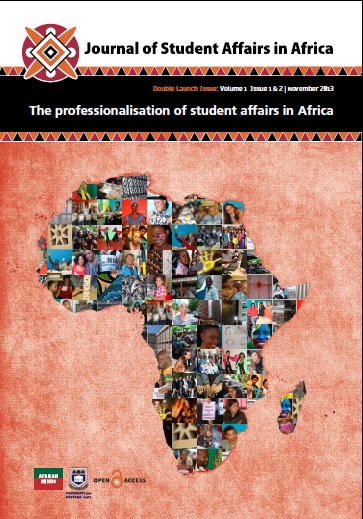 Vol. 1 No. 1-2 (2013): Double Launch Issue: The Professionalization of Student Affairs in Africa

This work is licensed under a Creative Commons Attribution-NonCommercial-ShareAlike 4.0 International License.

Authors who publish with this journal agree to the following terms:

Authors retain copyright and grant the journal right of first publication with the work simultaneously licensed under the Creative Commons Attribution Share-alike 4.0 International License that allows others to share the work with an acknowledgement of the work's authorship and initial publication in this journal.

Authors are able to enter into separate, additional contractual arrangements for the non-exclusive distribution of the journal's published version of the work (e.g., post it to an institutional repository or publish it in a book), with an acknowledgement of its initial publication in this journal.

Authors are permitted and encouraged to post their work online (e.g., in institutional repositories or on their website) prior to and during the submission process, as it can lead to productive exchanges, as well as earlier and greater citation of published work (See: The Effect of Open Access).

The Journal of Student Affairs in Africa (JSAA) is an independent, peer-reviewed, multi-disciplinary, open-access academic journal that publishes scholarly research and reflective discussions about the theory and practice of student affairs in Africa.